Hailing from the Peruvian Andes mountains, purple corn has been used for 1000’s of years by the indigenous peoples of this region for a multitude of purposes. It is used as a base for drinks, sorbets, puddings and popsicles or used to make bread and tortillas. One of the most popular uses for purple corn is in “chicha morada” – made by boiling the kernels with fruits and spices – a drink thought to date back to before the creation of the Incan empire. This sweet beverage is now recognised as a nutrient powerhouse due to its rich antioxidant content, vitamins and minerals. 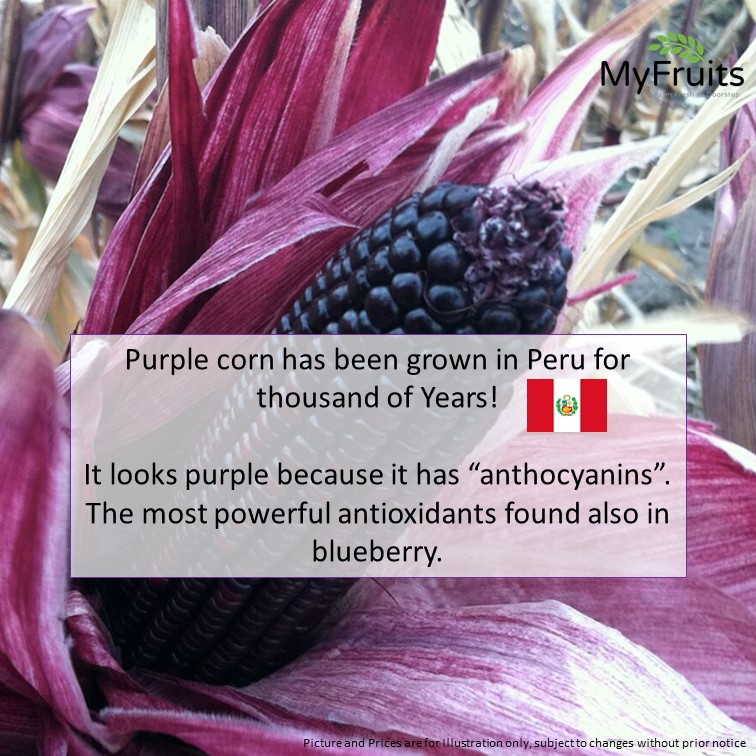 Why is blue corn blue?
It’s due to their anthocyanins. That’s the same class of polyphenols which make blueberries blue and raspberries red. There are hundreds of different types and their color is largely dictated by the pH of the plant. No corn that’s blue or purple is genetically modified to have this trait. It’s real and comes naturally.

The anthocyanins in red, purple, and blue corn appear to be largely responsible for the health and medical advantages they’re being studied for. To be clear, the following benefits have not been tested or proven in humans. So far, it’s lab studies and animal models only. This food and supplements made from it should not be used to treat, cure, or prevent any disease.

With that said, let’s review what’s being discovered…

1. More antioxidants than regular sweet corn
Based on ORAC values, which are a quantifiable way to measure antioxidant activity in the lab, here’s how the different colors compare:

Purple has nearly 14x more antioxidants than yellow corn! Your average blue corn will be about 3x higher.

2. Anti-aging through DNA protection
DNA mutation graphicA mutagen is anything that alters your DNA, and therefore, increases the likelihood of a DNA mutation.

All cancers ultimately result from a DNA mutation, though to be clear, the vast majority of DNA mutations do not cause cancer. However, they are linked to the aging process and that’s why anti-aging/longevity lifestyles aim to limit things that increases DNA mutations. Smoking, alcohol, and stress are all factors that act as mutagens.

Both the water fractions (water derived) and acetate fractions (acetate derived) from purple corn have demonstrated anti-mutagenic activity in a dose-dependent manner in lab experiments. The antioxidants in this vegetable are often credited as the reason why, but there may be other mechanisms that contribute. 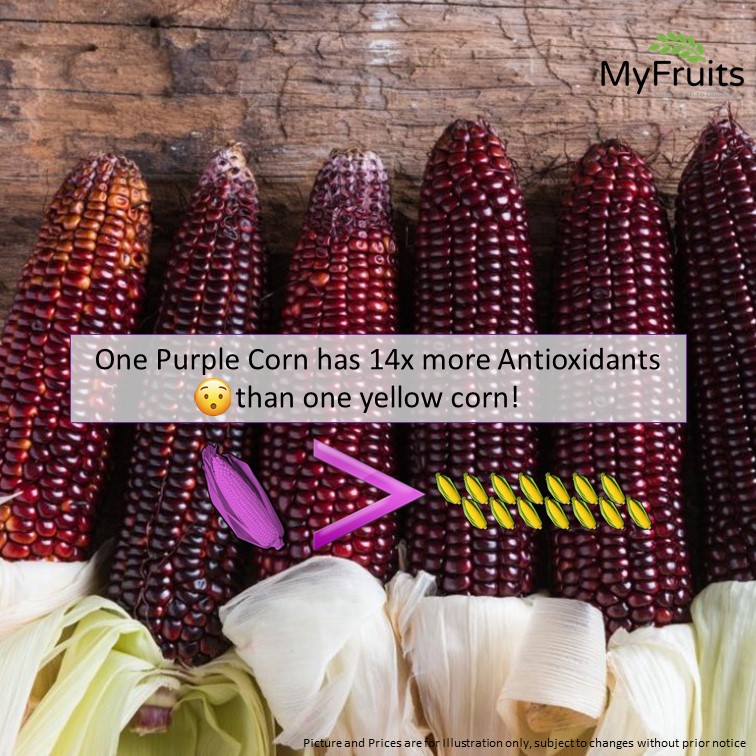 3. Anti-inflammatory via multiple pathways
The most abundant anthocyanin in purple and blue corn is cyanidin-3-glucoside (C3G). Being that it’s such a potent antioxidant, it should come as no surprise that numerous animal studies have found it to inhibit inflammation in the body.

In a study out of China, where obese mice were fed a high-fat diet over a 12-week period, it correlated with less liver inflammation. Several factors appear responsible including related gene expression levels, decreased lipid peroxidation (oxidation of fats), and boosting of their liver’s natural antioxidants superoxide dismutase and glutathione peroxidase.

When high-carb and high-fat diets on rats were tested by Australian researchers, consumption correlated with lower inflammation-induced damage from metabolic syndrome, which resulted from their unhealthy eating. South Korean scientists report it may have an anti-inflammatory benefit and protective role in diabetic nephropathy. At least that’s according to what they saw when experimenting with cultured human cells.

4. Being researched for anti-cancer potential
Doxorubicin is a common chemotherapy sold under the brand names Adriamycin, Rubex, Doxil, and Lipodox. In terms of its major side effects, the potential for heart damage is one of the most concerning.

Italian scientists gave this chemotherapy to mice, along with diets of either yellow corn or purple corn. For those getting the latter, it appeared to reduce heart damage :

Not much research has been done to evaluate the potential for direct anti-cancer activity. The Japanese report that the purple pigments helped to inhibit prostate cancer growth in a cultured cell experiment. Ohio State University said that purple corn, along with other anthocyanin-rich foods like chokeberry, bilberry, elderberry, and purple carrot, all appeared to suppress colon cancer cell growth in their lab.

5. Compatible with probiotics
Due to their essential oils, many high ORAC superfoods – like spices – exhibit strong antibacterial activity. Your body’s healthy gut flora (probiotics) might be harmed by them.

Scientists from a university in Peru, and another in North Dakota, tested in the lab how purple corn interacted with probiotic lactic acid bacteria such as Bifidobacterium longum and Lactobacillus helveticus. It didn’t harm them.

6. Natural aphrodisiac
While not yet tested in humans, science suggests that just like watermelon and maca, this food might help get you in the mood.

That’s a quote from a study out of a Mexican university, which tested different dosages administered to male rats. 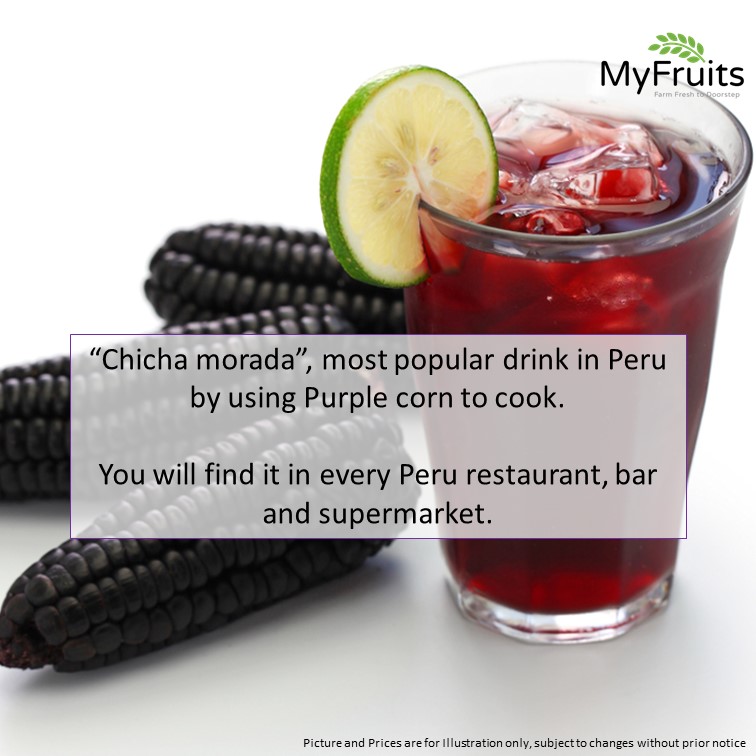 7. May lower blood pressure
In hypertensive rats where the purple pigments were 1% of their diet, decreases in blood pressure and heart rate were seen versus the control group. (16)

This is a benefit that even has some human data to back it.

A small double-blinded and placebo-controlled trial was done in Peru:

30 people participated; 11 men and 19 women
The majority (70%) were middle-aged; 45-64 years old
Most were overweight as defined by BMI (90%)
Most had been diagnosed with high blood pressure (67%)
They were split into two groups and given purple corn supplement capsules or a placebo. The dosage was taken once per day in the morning.

Everyone went through 4 different phases, lasting 2-3 weeks each, where they were tested with both the supplement and the placebo.“Study findings showed that blood pressure readings for every individual, regardless of age, gender, body mass index level, or initial average blood pressure reading, decreased from baseline levels to end of study, especially after taking a purple corn extract capsule for 3 weeks. In this study, those individuals who had higher blood pressure readings at baseline showed the most marked reduction in systolic and diastolic readings…”

8. Weight loss
People normally don’t think of any carb as being a weight loss superfood, but that might be one of the benefits blue corn has going for it. Sorry, tamales are probably not the best form for this purpose! Though when in the form of a pure powder or extract, someday it might be a hot ingredient for diet pills.

A Japanese university has reported that the type of anthocyanins found in colored corn (cyanidin or cyanidin 3-glucoside) seem to influence gene expression in a way that promotes lower body fat. They used adipocytes, which are fat storage cells found around your connective tissue. When treated with these anthocyanins they saw:

Higher secretion of adiponectin and leptin, both of which are hormones related to blood sugar levels and decreasing the feeling of hunger. Activation of the AMPK pathway, which is linked to weight loss and numerous anti-aging effects. 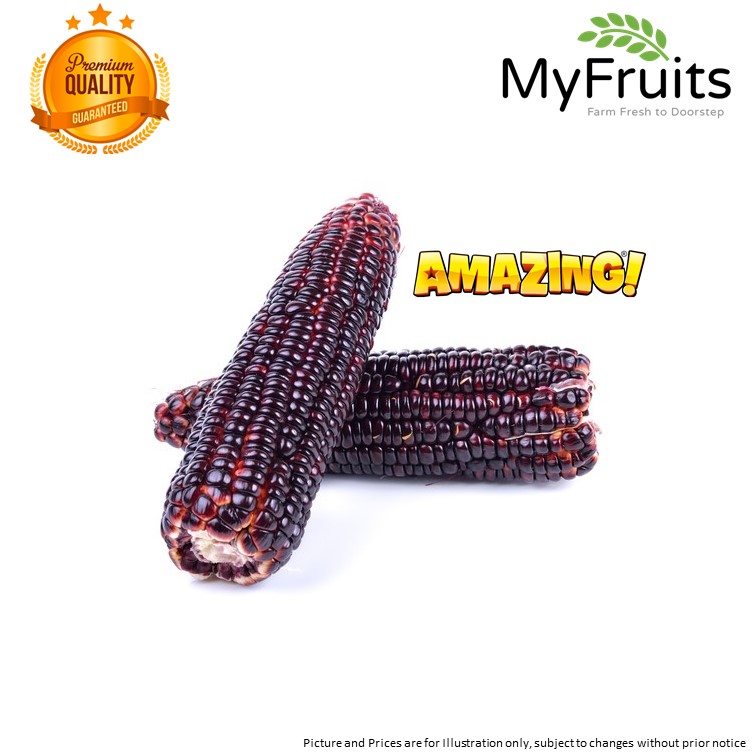 The takeaway
Blue corn tamales and cornbread recipes saturated with oils are far from healthy, but the science suggests they may at least be better for you versus their yellow corn counterpart!

A lot more research is needed before any medical benefits can be determined. Since there’s no evidence of toxicity or side effects from blue corn, you have nothing to lose from switching yellow corn masa flour to this variety. It also makes for prettier presentation of your food!

Minimum order of RM68 for all Kuala Lumpur and selected Selangor areas from Tuesday – Sunday (9am – 6pm). Free fresh fruits delivery for purchase above RM120 to area under coverage. RM8-12 delivery fee for areas such as Kajang, Klang, Sg Buloh, Shah Alam, Putrajaya, Cyberjaya, Kota Kemuning etc. Please contact us first before placing order if your area is not within the dropdown list.